Horse,has his own Web Page. This site was set up and maintained by John Maher. In his memory it is being updated in the same format and style as it was originally created.

The late Erik Ilott was renowned as the last of the Bristol Shantymen. A charismatic old sea dog, he was an honorary member of both the Bristol Morris Men and of the Earlsdon Morris Men (who hail from near Coventry). In his will, he asked that our two sides should perform in his honour in various Bristol locations which were important to him. Bristol invited Earlsdon down for this tour, which proved so enjoyable that it has been repeated on a regular basis. The two sides take it in turns to arrange the day, which is generally marked by dancing at as many public houses as possible. We feel sure that Erik would have wanted it that way... 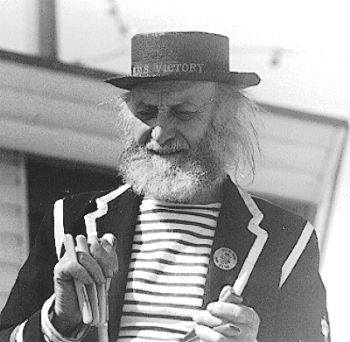 Erik Ilott, on tour with Bristol Morris Men, playing the bones - his speciality.

The Shropshire Bedlams have been favourites of the Bristol Morris Men for many years.

Windsor Morris one of the first revival women's morris sides.

Things That Interest Us

Learn Tai Chi Chuan with Martin on Wednesdays from 7:30pm to 9:00pm at Orchard School in Horfield. Details are on his website.

Links to other morris sides and things that interest us.

The archive contains more information about the Bristol Morris Men.