The small town of Keynsham (spelled K-E-Y-N-S-H-A-M!) lies half way between Bristol and Bath along the A4 in the South-West of England. For more information about the town take a look at Somerset Towns and Villages-Keynsham.


When can you see us perform?

Because of COVD-19 we will not be performing in Keynsham. Hopefully we will be back in 2021
Click on the image below to link to the 2020 Keynsham Mummers Play! 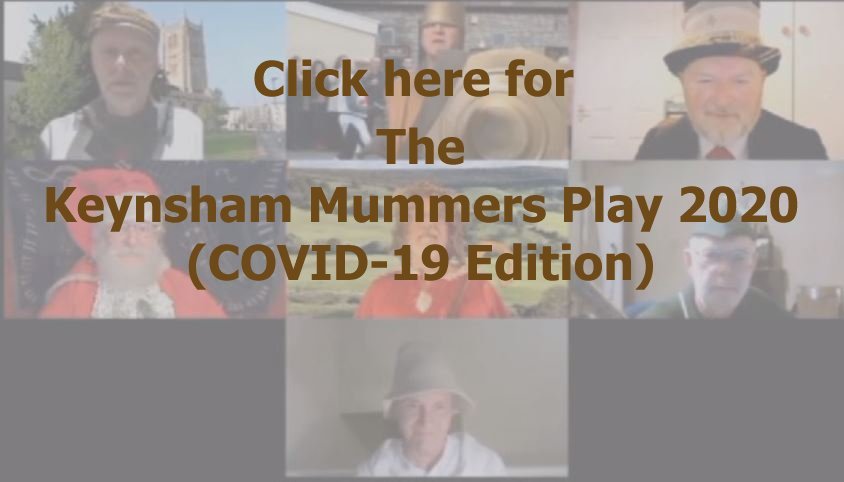 The play is performed every December 26th. In the UK the day after Christmas Day is known as "Boxing Day".

A brief history of the present revival

In 1977, with the formation of Keynsham and District Arts Society, an attempt was made to produce the play, but there was never a full attendance at rehearsals and the idea was abandoned.

Coincidentally, in December 1976, just about the same time as the Keynsham and District Arts Society were trying to revive the play, a group of Bristol Morris Men had just performed it at a University of Bristol folk dance! Following a plea for help broadcast on Radio Bristol the morris men contacted Bunty Dunford enquiring as to whether they could help. Jumping at the chance of it being revived Bunty suggested that the Bristol Morris Men take on the challenge. With a few changes in the cast they have performed it ever since.

The play, was watched in 1822 by a certain Joseph Hunter. In the words of the English Folk Dance and Song Society's journal of December 1947: "Amongst Joseph Hunter's manuscripts in the British Museum, is a transcript of a Christmas play which Mr Hunter saw performed at Keynsham, county. Somerset, on December 27th, 1822, He obtained a copy of the words from one of the actors, and this may be found in another volume, signed James Cantle, Keynsham. Mr Hunter writes that unlike the actors in the north of England, "the mummers", these called themselves "Christmas Boys". Some of them wore swords".

Photocopies of the original manuscript are in Keynsham library, and the text is also available on the Web; but the play needs the boisterous interpretation and ad-libbing of experienced performers. The ending is open to a lot of interpretation as the play, as collected, has no neat ending and so each year much discussion goes on as to how it should end.


Old and new pictures of us

These are some of the earliest photos we have. We know they are old as they are 1) black and white and 2) we all have long hair!!

These photos are more recent around 1992/3

Here are some photos from the '96 performance .


Where can I find more information about Mummers Plays?

The English Folk Play Research Page is an excellent place to start!


Where can I find more information about Bristol Morris Men and Morris dancing?

Paul Woods, who was the original Shepherdess in the revived Keynsham play, and who has also played Father Christmas, maintained the Bristol Morris Men web site